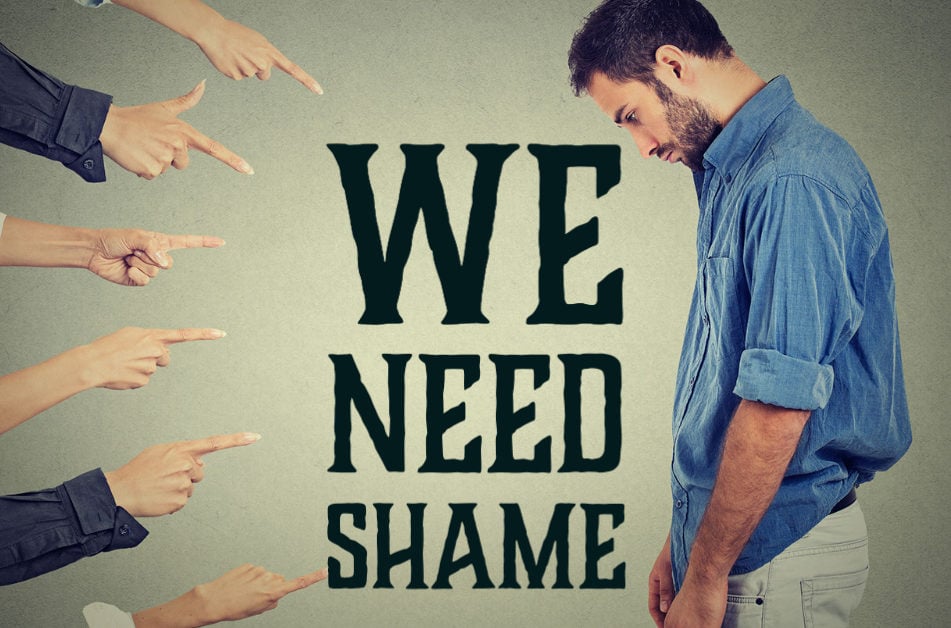 Shame is a vital part of a freely functioning society, and it has been disappearing in ours for over 30 years now.

There was a campaign in the 1990s to understand and sympathize with those who steal. The classic example used was the struggling single father who needed to feed his baby, and therefore, robbed a 7-11. I’m not even sure this ever happened, but the example was bandied about endlessly as a way to teach us all that there’s a story behind everything, and therefore, we should feel compassion towards this mystery father and not only NOT prosecute him, but more importantly, not shame him or those like him who are merely “down on their luck.”

Thus began the long and winding road of shaming no one, ever, for anything.

From criminals, we moved on to bodies; no one should ever be made to feel “less than” because of their appearance. There’s no such thing as “fat,” or “obese” and certainly, no one should ever be called ugly or disgusting because someone somewhere surely finds them attractive and, therefore, we all must.

We’ve gone so far in the body positivity movement that we now shame beautiful people.

Yes, you read that correctly; as we remove shame from those who don’t fit traditional norms of “beautiful” body size and shape, we have shifted the shame to those who do. Victoria’s Secret, for example, got rid of their famous “angels” last year (those women who were of traditional super-model build), and instead created an entirely new group of models who now advertise their products in their plump, oddly shaped, more acceptable ways. https://www.harpersbazaar.com/celebrity/latest/a36766170/victorias-secret-getting-rid-of-angels-launching-the-vs-collective/#:~:text=Victoria’s%20Secret%20is%20doing%20away,the%20future%20of%20Victoria’s%20Secret.%22

Other things and people we’ve been told over the years not to shame include everything from misbehaved kids in public to pedophiles….and everything in between. https://www.metroweekly.com/2018/07/tedx-speaker-argues-that-pedophilia-should-be-accepted-as-an-unchangeable-sexual-orientation/

The problem is that when there’s no shame in society, there are no rules, no boundaries, and eventually, quite literally, no laws.

The past few years has seen a laser focus on homelessness and removing the shame from it. In fact, we’re supposed to now call it house-less-ness. They have a “home,” it’s on the streets…they just don’t have a house, you see. https://www.architecturaldigest.com/story/homeless-unhoused#:~:text=In%20the%20mainstream%20discourse%20and,HUD%20uses%20in%20its%20reports.

Here’s the problem; while there are many legitimate and sad reasons that people find themselves in horrible situations; whether it be an inability to feed their children, or having no structural home to live in, that doesn’t change the fact that there must be shame attached to those realities in order to motivate and compel people to do everything in their power to avoid winding up in those situations and to get their asses out of them as swiftly as possible if they ever find themselves there.

It’s time for that reality check to be re-instilled into our society: Shame is a motivator.

The reason we have 11 million job openings in America and an almost record low labor participation rate is that there’s no shame in not working. Conservatives will tell you it’s because the government is paying them to stay home which is a provable lie, and liberals will tell you that people are both sacred of covid and unwilling to work for big, mean companies who don’t offer the proper benefits, which is also horseshit. Regardless of the reasons, the safety net of knowing that there is no shame in not working provides comfort to those spending their days living with enabling relatives, playing video games and draining society. https://www.cnbc.com/2021/10/20/6-reasons-why-americans-arent-returning-to-work.html

Having grown up paycheck to paycheck and being told more than once that we couldn’t afford to do something I desperately wanted to do, I knew at a young age that I never wanted to feel that way as an adult. I was instantly motivated to make money.

Once I ventured out on my own, I remember the pit in my stomach as I stood at the grocery store check out line waiting to find out if my check would clear or my ATM card would be approved. More than once, I was denied…and had to walk away hungry, empty-handed, and ashamed…but also committed to continuing to work my ass off to ensure I would never feel that again.

When I started to make what I thought was “decent money,”, particularly for a 21-year-old, I remember heading to Home Depot to buy a fancy new gas grill only to discover I could barely afford a not-even-close-to-what-I-wanted model. I bought it…so that every time I used it I could motivate myself to throw that thing out as quickly as possible after working harder to never again have to disappoint myself or anyone I shared my life with simply because we didn’t have the money. Today, as the economy is at its lowest point in 40 years and most people dread going to the gas station or grocery store, neither my wife nor I give it a second thought, and absolutely nothing about our lives has changed. I vividly remember having $5 cash, needing to get to work, and an empty gas tank. Gas cost $2/gallon and I had to stand there at the pump, doing math to figure out if I could get to and from work on only 1 gallon. Never again, I swore.

We need shame…we need to inflict it and use it as a motivator. It has its’ place.

Perhaps most importantly, we need to, at the very least, not remove it entirely and normalize everything. The latest disgusting example of this is the new national campaign that doesn’t discourage drug use at all…it just encourages that you do it safely and with friends.

It’s called “know overdose…” get it? They’re going to teach you how to KNOW how to properly and safely overdose. Billboards, which began in San Francisco (of course) are now spreading to other high use heroin areas across the country teaching people how to do absolutely nothing to stop using drugs and instead to make like-minded friends and have emergency overdose drugs on hand for when things get of control.

Rather than encourage people not to use heroin at all, the campaign teaches people to do so in groups because it’s less harmful. Which is like saying, “If you’re going to play Russian roulette, please do so with plenty of medical equipment handy in case we need to put your brains back inside your skull.”

The campaign is providing deadly misinformation. Let’s go through the three main ideas:

This is what happens when a society spends decades making up excuses to explain, justify, rationalize, and normalize illegal, idiotic, dangerous, and most importantly, shameful behavior. Having empathy and sympathy for users is the job of counselors who are working with them one-on-one…the job of society is to shame and marginalize them as a lesson for others who consider going down that road.

And think about this irony; we just spent the last year dividing an already divided nation even further by shaming, shunning, and punishing people who wouldn’t get a controversial vaccine that many didn’t even need because they already had natural immunity from having had Covid…and don’t start with me, I’m vaccinated; I made that choice, as opposed to the loser downtown making the choice to fill his veins with heroine, bleach, AIDS and god knows what else. He and I are to be revered…the “idiot” that said “no, I talked with my doctor and decided that the Covid vaccine isn’t for me?” He should never be allowed to see a concert, travel, work, or congregate anywhere ever again. Great…now the next time I go see a Broadway show I’ll be sitting next to some strung-out heroine-addled bum and his wacky friends who are supporting each other as they overdose their brains out. Good times…and totally logical, too.